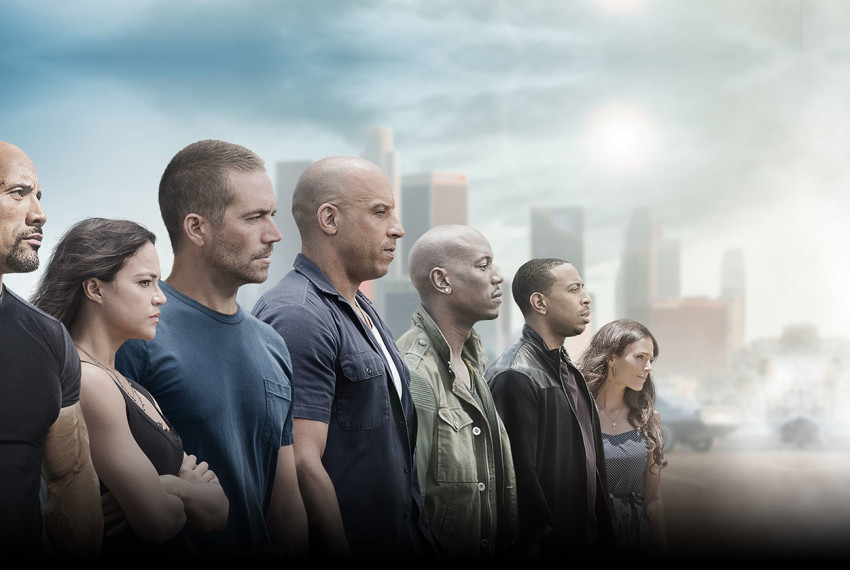 *This review may contain SPOILERS*

Okay, firstly, let’s get the story line together. Initially, we start with Deckard Shaw (Jason Statham), who is seeking revenge, after his brother, Owen Shaw (Luke Evans) was brought down by none other than Dom Toretto (Vin Diesel) and his gang. We are also introduced to Ramsey (Nathalie Emmanuel), a very attractive and intelligent hacker, who has been kidnapped by some bad guys led by Jakande (Djimon Hounsou). She has created ‘God’s Eye’, which is meant to be this awesome, cool program that can hack into absolutely anything and be used as a spying device. After finding out that Han (Sung Kang) had been murdered by Deckard, who also sends a bomb to the front door of the famous Toretto home, Dom and the gang are introduced to Hobbs’ (Dwayne Johnson) boss, who is literally known as Mr. Nobody (Kurt Russell) the entire movie. Mr. Nobody gives Dom and his team an ultimatum – help him find Jakande, bring Ramsey back safely, and he will allow Dom to use God’s Eye to bring down Deckard. While this is all happening, Letty (Michelle Rodriguez) is in the process of figuring out who she used to be before Dom brought her back ‘home’. As we know, her memory was wiped out, and she doesn’t feel she can be the girl Dom knew, but eventually sticks around for the ride. We also find out that Mia (Jordana Brewster) is pregnant again, and though she wants Brian (Paul Walker) to go on this ‘last ride’ with Dom, she needs him to come back home. Now, that should be it. We all got that?

Secondly, for those who aren’t all with the Fast and Furious franchise, 3 and 6 tie in with this one. We technically start off where Tokyo Drift ended, but at the same time we continue on screen with Dom and the rest of the gang from the drama, tragedy and big bang of 6. So, there cannot be any skipping involved. You need to watch these films in order.

What I think the overall story line of Fast and Furious 7 is… bringing Brian home. We don’t see much of Walker’s character, and that would be obvious considering the circumstance. Dom is the main character here and leads this one on his own, instead of Dom and Brian leading together. 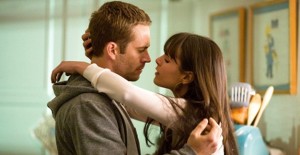 Yes, just like the last few, there is loads of that mindless action, ridiculous stunts and dreadful dialogue. I thought nothing would beat that laughable jump from Dom in 6, which saves Letty’s life after being thrown over the bridge. But still, those crazy stunts exist in this one which once again, brings no harm, not even a scratch to anyone. But the creators did go one better, since the bringing down of that big-ass plane and that never ending runway. This time, they were driving themselves out of a plane, parachuting safely and accurately onto the road they were required to land on. There’s also that fatal run across the bus that Brian makes, whilst the bus hangs and ultimately falls off the edge of a cliff. He makes the leap of faith, and on the other end is Letty who drifts along the edge in perfect timing for Brian to catch onto the spoiler of the car she drives. In addition, you thought the fight between Dom and Hobbs in 5 was hardcore? This time we have been spoiled with exciting fight scenes; The Rock vs Statham, Statham vs Diesel and Rodriguez vs Female UFC legend, Ronda Rousey. 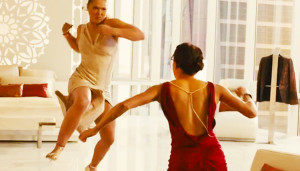 James Wan isn’t usually making these crazy action movies, but he has taken on Justin Lin’s role and has only tried to go better, crazier and even more impractical. And that is what the Fast and Furious franchise has become. However, let’s make this clear. If you’ve loved and been with Dom, Brian, Letty, Mia and the rest from the very beginning, then you’ll love it right through. Regardless of the unrealistic stunts, inconsistent car details only a real mechanic can pick up, and all that corny ‘I don’t have friends, I got family’ talk, Fast and Furious fans are one of a kind and we stand proud of this franchise. The creators have stayed true to everything that we believe in in these movies and everything we love, and that is why 7 is just as special as the rest. The difference however, and what makes 7 so much more special, is that you can tell that right throughout this film, that this was for Paul Walker. It’s all about getting Brian home to his family. The film honours both Brian and Walker perfectly. 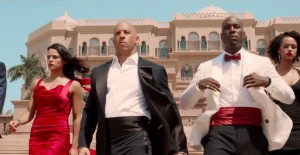 If you want to criticise the movie for all the unrealistic and impossible stuff, go ahead. But show some respect, I say. Diesel and the guys have just completed an entire movie, after tragically losing such a big part of it. I know I am here to critique, but films such as Fast and Furious 7 are not meant to be critiqued. They are just a bit of mindless entertainment. It ain’t going to win an Oscar. Just sit back, there is no need to think, have a giggle and just enjoy.

There is some obvious use of CGI on Walker’s face, such as that in a scene filmed in Abu Dhabi, where Dom and Brian jump out of the car that continues to fly through the top floors of a building. When Brian is looking at Dom with a smile off success, holding what we know as God’s Eye, the replacement body didn’t go unnoticed for me. As we know, body doubles were used for what was yet to be filmed. I salute Cody and Caleb Walker for finding the courage to physically replace their brother. The use of the Walker brothers would have been a great honour and tribute to the Walker family and legacy.

And then comes that tribute. I was in pieces the minute I realised the beach scene at the end, is where the tribute to Walker begins. I’ve loved this series and had a teenage crush on Walker since he was known as Buster. I named my first dog Buster. Now that Brian is back with Mia and his son Jack, we watch them play along the beach, whilst, Dom, Letty, Tej (Chris ‘Ludacris’ Bridges) and Roman (Tyrese Gibson) sit and watch, pondering whether to say goodbye. We realise, this is where they leave Brian to finally be free. Already tearing up, what made me explode was when Dom is asked as he gets up to leave, ‘aren’t you going to say goodbye?’ Dom says with a smile on his face, ‘you don’t say goodbye to family,’ and in the background See You Again, the emotional song from Wiz Khalifa. Tell me that wouldn’t make you break down? Dom is then driving down the road in his Charger, and pulling up along him is Brian in a good old Supra. This is the ‘one last ride’. Brian then steers off to the left into a different direction. I am just tearing up writing this. There will not be a dry eye in the cinema. 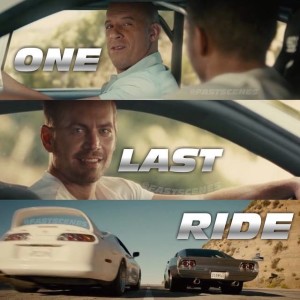