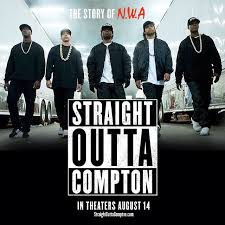 I’ve gone into this movie knowing exactly who N.W.A was, knowing some of their names, what songs were theirs, total respect, but not a devoted fan and knowing little about their history. So, I was very keen to get to know how N.W.A came about. I was extremely enlightened and my knowledge of Rap culture, the history of police brutality and the ‘hood itself has now definitely been expanded.
I didn’t go into this doing my research or buying all their CD’s to prepare myself, nor did I buy them after as most people would. I wanted the movie to talk for itself. Especially with Dr Dre and Ice Cube’s contribution, this biopic was not going to be short of authentic. It’s a rags-to-riches story that brightens the screen when the music is on and captivates the audience with a tale based on the glamorous and dirty side of the music industry.

The other thing I noticed was, hardly anybody makes real Rap music anymore. The film really showcases how much change Rap has made since the 80’s, when you think about what we are listening to today. Music back then was all about freedom of speech of subjects that mattered. We’d hear a lot about political matters, and real life written in elegant rhymes. Whereas today, most songs aren’t even trying to be intelligently poetic. Mind you, there’s a small number who actually do it for the music. Nobody is real God dammit! Nobody! The only rapper I can think of in recent times, with a true outlook of life is a white man from Detroit. Okay, there’s the end of that rant. Let me move on to my next. 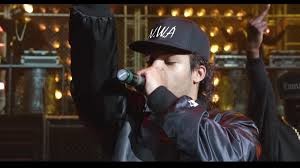 I realise now that the one thing that hasn’t changed, is the police brutality. Its mind blowing to realise that even if there was a cooling down period, today, we are seeing the same scenes we take a glimpse of in Straight Outta Compton. Black kids on the corner of the street, or one black kid just crossing the street to get home from a friends house, all minding their own business, get thrown to the ground and frisked for nothing, other than the colour of their skin. Not going to say for a minute I know how that feels. I’m just an Aussie from the ‘burbs of Melbourne who has never had run-ins with the law, but I know if I was in their position, you best believe I’d create something as brutal as Fuck The Police. But, who’s going to make the Fuck The Police of today? Last powerful song I heard was for the film, Selma. Well, that goes back to my first point. Nevertheless, my mind was completely ignorant to that reality, but now it is opened. 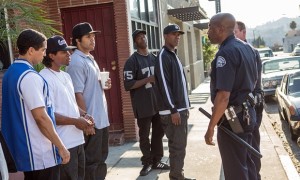 I bow down to the actors who played their roles respectfully and perfectly. Their similarity in appearance was just a bonus.
O’Shea Jackson Jnr, son of Ice Cube himself is a great fit to play his father. It was a bit of an advantage, especially since their voices are very similar, but he did have to go through many auditions before he got the role, and for that I respect the men even more. When it comes to Dr Dre, Corey Hawkins makes us understand how much of a genius the man was. Eazy E was played by Jason Mitchell, and it’s the scene where he is in hospital, officially diagnosed with HIV, where we see him plea to the doctor and finally see him through the door’s window breaking down, where we feel the pain that Mitchell was able to provide through his incredible performance. Oscar worthy. Now, Suge Knight I knew a little bit about from his relationship with Tupac. See, Tupac I followed a little more and read into Suge a bit. He was a man full of anger and control, and R. Marcus Taylor confirmed that with his realistic performance. We can’t forget to mention Paul Giamatti who played Jerry Heller, the man who would ultimately break N.W.A up after helping them go big in the first place. Giamatti is always good. 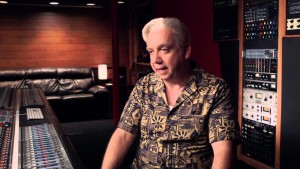 I took my partner with me to watch this. He’s not into Rap or Hip-Hop, and knew a lot less about N.W.A than me. He really liked it, which goes to show. The progression from one historical fact to the next and the development of their story, and the acting itself is what makes this movie. There are no requirements going into this film. You don’t need to be a fan, know all about them, or be a Rap fan. Just enjoy a true story about arguably the best Gangsta Rap artists the world has ever seen. It’s the fact that we get to hone into the complex scenarios they get themselves in, such as the controversial lyrics, the beef between each other, contract disputes and so on, that makes this a ripper of a representation of N.W.A and those associated. 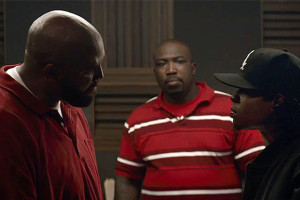 I also want to bring forth a very on point statement made by someone else who did a review on Straight Outta Compton. A lot of the reviews I read made me so angry; one calling it a “movie about five corrupt men” that like it that way. I just wanted to share this quote from one of my favourite reviews: “The problem with this movie is that the people who made it actually dared to portray young, angry black men as heroic, not as criminals or predators. It’s okay to glamorise white criminals because Hollywood was built on that. From Public Enemy to The Godfather, white audiences have always loved to sentimentalise their own criminals. But you can’t do that with black men who rap about crime even when they aren’t actually criminals themselves. When (James) Cagney postures like a thug in some ancient piece of crap, that’s cool, but when black men do it today, that’s dangerous and irresponsible.” I’ll let that sink in for a bit.

There will be some head bopping, some raw emotion felt, and some giggles. The film will say simply to you, that there will never be another N.W.A. Total respect to F. Gary Gray and the crew for amazing direction and story telling.
No fence sitting here. Straight Outta Compton is well deserving of a 5 out of 5.

If you enjoyed this review, and want to read more in future, subscribe today and receive an email when my next piece is up. Hit the menu button under the peach in the top left > menu will slide open > scroll down > enter email > verify > enjoy the read!