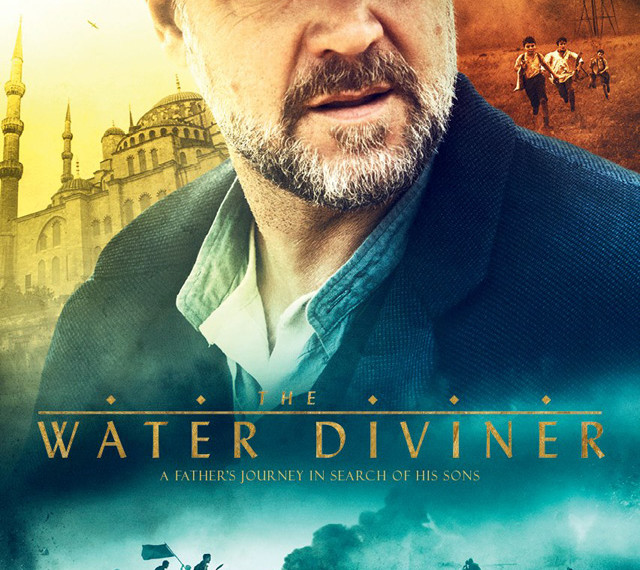 *This review may contain SPOILERS*

With the centenary approaching, The Water Diviner is a perfect tribute to a significant moment in Australia’s history – the landing of the Aussie troops in Gallipoli on April 25th, 1915.

Four years later and after his grieving, delusional and angry wife takes her own life, Conner, played powerfully by Russell Crowe, heads off to Turkey in search for his missing three sons. The boys had gone off to war together, and we are told that they have presumably died together in the same day. Connor is determined to fulfill his wife’s wishes, and evidently bring to himself, his own closure, by finding his sons’ remains, and bringing them home.

From the beginning we are sent on an emotional, steady road, minus any boring, cringe worthy or dull bits. We are with Connor on his entire journey, from the moment he finally finds his sons, to the realisation that he may fall in love again. The main story line intertwines with the smaller tales that interrupt the reason for his journey, but this is not unwelcome. All bits are important for those who are seeing the back story of ANZAC for the first time, and for those looking for a familiar legend. Though we are not sure if the story of Connor and his search is entirely fictional, we know that any father would embark on this pursuit if he could. We feel for those who have actually faced this reality thanks to amazing, authentic acting. The actual war story and aftermath itself within the film could quite possibly be accurate, as we know the Australian army returned to Turkey to find their fallen.

I appreciate that the film is not entirely bias, by depicting the story of the ANZAC’s alone, and it is refreshing to see the Turkish side of this historical detail. Connor is joined by Major Hasan whom, though reluctant at first, assists Connor in his search. We meet the Turkish Major with his second in charge, as he leads the Australian diggers on a tour around Gallipoli to find their dead, and bury them. We discover that this man and his army were the exact men who fought against the Aussie troops, through his own recollections of the battle and glimpses we are allowed to see of the actual fighting, throughout the movie. These flashback scenes also reveal the three boys’ involvement, and how the war ended for them. Major Hasan’s character is considerate and somewhat sensitive to the fact that a man has travelled so far to find his children. It’s this moment we realise, only one father has come looking for his son, and the Major acknowledges this statement also.

Crowe is able to direct this film with obvious hints of staying true to all sides of the conflict. The war scenes respectfully reflect the horrors of what happened, without too much blood and gore. One scene in particular that stays with you after, is how the three boys lay on the dirt in agony of pain, if not dead. One of the boys cries rings in your ears long after watching this movie.

The characters are all believable. Ayshe, the Turkish woman who is the host of the hotel Connor stays at in Istanbul, also has a lot of hidden pain she does not bring to the surface right away. She is truly an accurate rendition of a victim of war for that time period, convinced her husband is alive, and staying strong for her son. At the same time, she is confronted by traditions in her culture, as her brother in-law tries to take control of her and her son. The little boy, Ayshe’s son, Orhan is a pleasant inclusion and relief from the drama, but deep inside is also in fear for his missing father.

I also want to make mention of Sydney born actor, Jai Courtney who plays Lieutenant Hughes. He is slowly becoming one of Australia’s favourite home-grown talents. For someone we didn’t really recognise until he started appearing in American films, we are happy he has come back home to be part of such an epic depiction of a story so important to all Aussie’s. Ryan Corr, who plays one of Connor’s sons, is an Australian sweetheart we have grown to love, and this big screen opportunity will be huge for him. He plays the character with so much passion.

The only criticism I have is the way the film portrays the Greeks involvement. Though part of the allies, the Greeks look somewhat more barbaric than the enemy themselves. Because we see them attacking the hero and his help, and interrupting the journey to make us feel as though the hero is in danger, this slight inconsistency, though short-lived, would pee off a few Greeks.

As a film, it stands strong and firm against any Hollywood created drama. Aussie’s and Russell should be proud of this piece of art. I am honestly very proud as an Aussie and a movie lover, of this film; for everything it stands for, its accuracy and relevance, convincing performances and satisfying cinematography.

The Water Diviner is a solid 4 and a half stars out of 5, and everybody who watches this, will be applauding in the end.