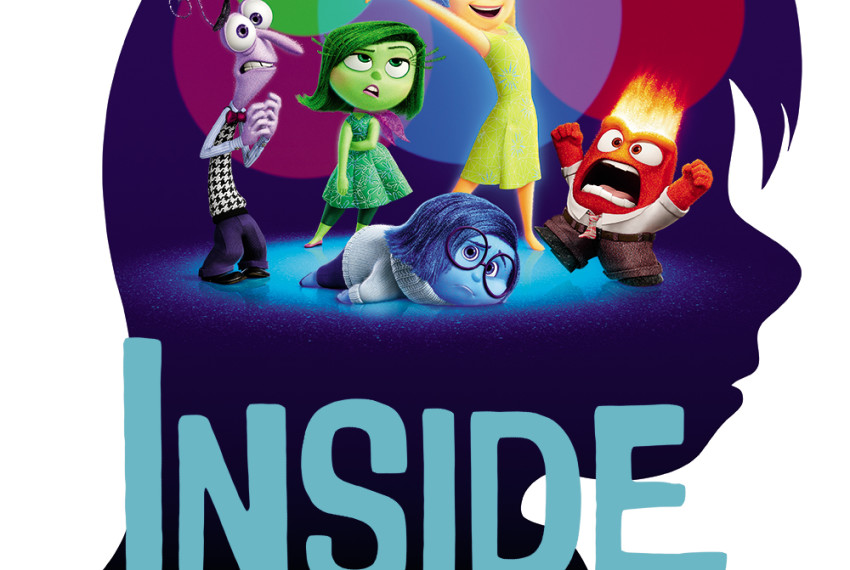 I didn’t read any reviews before going into Inside Out. It’s Pixar, why would I need to? But, after watching it, I had to look into whether I was the only one that felt the way I did. I discovered I wasn’t the only one. Phew! So, whatever I say below, please note, I say it as a Disney fan and a Disney fan that isn’t alone.

I saw a trailer for Inside Out late 2014. I was excited. What a concept; little people in your head that are in charge of your actions. It’s genius. It was bound to be another winner for the kings of animation. But, it wasn’t. The hype was a lot bigger than the movie itself. I felt it missed that one little edge-of-your-seat/will-they-make-it element. I wasn’t on the edge of my seat, and I knew they were going to make it. I didn’t feel the struggle that Joy and Sadness felt, trying to get back to headquarters after being sucked out into… I don’t even know where they were. The entire film felt very disconnected and sometimes judgmental.

Don’t get me wrong. The idea is there. It had good bits. It was visually a treat and full of potential, but it just wasn’t realistic, even for an animation. I just felt frustrated. Riley, the 11 year old whose brain we are in, didn’t become a miserable young girl because Joy was no longer in control of headquarters. She’s an 11 year old who just left her life in one city, to move to another city with her parents, because that is where Dad’s job has taken them. She misses her friends, hockey and overall her life because that is a normal feeling. Not because Joy is gone. Realistically, kids go through that moody phase that is triggered by change. Sorry that I went into this picking at the technicalities, but I just couldn’t help it. The creators have tried to be really clever; too clever to the point where it became too exciting for them, so they just threw everything in, making the film disjointed. It’s like they’re hoping the colourfulness of it all will overweigh the lack of depth. Take the hockey thing for example. How can Riley forget how to play hockey, because one of her emotions isn’t there? She hasn’t lost her memory, she’s just lost Joy. 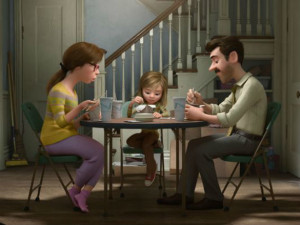 Kids will love the colour, but that is it. I took my 9 and 11 year old nephews with me. If I had known that this was going to be so complex and (yeah, I’ll go right ahead and say it) depressing, I wouldn’t have taken them. From the trailer, all we saw is that ‘foot is down’ scene. That was hilarious. But, that is all that is hilarious. We giggled here and smiled there, but they don’t make you crack up like Mike and Sulley, or Dory.

I felt like Joy was a bully. She makes you feel as though Sadness makes you think that being sad is wrong and not natural, Disgust makes sure you look good all the time, Angry is how you really feel but you should never express how you really feel, and Fear is weak and easy to walk all over. Let’s talk about the judgmental stereotypes. Joy is thin and fashionable, Sadness is bigger with a big jumper on and glasses, Dad is lazy, thinking about sport rather than family discussion, and Mum thinks of what could have been if she went with someone else when Dad is in lazy mode. It goes on. If this is a movie for kids, what misconceptions are we setting up for them? It’s not for kids and in the risk of being overdramatic; it is not for kids that are going through hardships themselves. As an adult, just wait for DVD/Bluray. 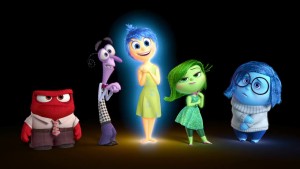 There are a lot of characters to get to know as well. We meet the family, we meet the main 5 emotions, but then there’s the rest that work on the outside of headquarters. Mind your step when it does go outside headquarters; it gets a little confusing. You jump out of the story line because you want to figure out what part of the brain you’re in. At the same time, you’re meeting new characters and it’s all going so fast you forgot what impact they had. The only supporting character that makes somewhat of an impact to the front line of the film is Riley’s imaginary friend Bing Bong. His story doesn’t become full circled, though. In the film, he is forgotten and walking through what we think is ‘long term memory.’ He assists in Joy and Sadness’ journey back to headquarters, and asks Joy to make Riley think of him again when she gets back using (what we find throughout the film) the balls upon balls of memory. This isn’t even a spoiler alert, but once they leave from Bing Bong, he isn’t mentioned again, therefore not fulfilling Bing Bong’s passage in the film. I found this quite disappointing. 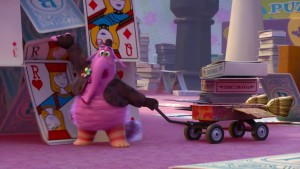 Then, comes the ending. All I could think about was, is that it? Is that how this is going to end? So simply? So easily? So cringe-y and corny? All that adventure for something so unusual to get our main characters over the line, and for everything to be fixed by a simple action.

I am trying really hard not to give anything away, because I want everybody to see it, based on the fact that it is very 50-50. So many people call it the best Pixar film in ages and so many are calling it a disappointment. So, this is just one other audience member’s views and yours could be very different. I encourage you all to give it a go out of curiosity. 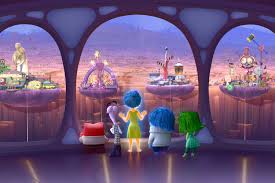 I give Inside Out 3 out of 5. I just don’t have the heart to give it a 2 because I am a sucker for Disney Pixar regardless. I didn’t hate it; I just wish it was better. Visually, it is one of the best. So, 3 is a good on-the-fence rating.